No Thank You, Evil!
by Shanna Germain and Monte Cook

I’ve been a fan of Monte Cook Games’ products since I first heard about their Numenera game. While I haven’t loved everything the company released (I’m looking at you, The Strange!), when I saw they were launching a kickstarter for a kid’s version of a RPG using their Cypher System mechanics, I jumped on board. I was introduced to RGPs a few years ago, and I’ve been hooked ever since. And as I’d like to share this hobby with my children, I’ve been keeping my eyes open for a good system to facilitate that. Everything looked good in the kickstarter, but it looked even better once I got my copy in the mail.

From the first page of the Rulebook to the colorful tokens included, this game is full of eye-candy for kids (and adults who like bright, colorful, cartoonish drawings!). To simplify the rest of this review, I’m going to break it into two sections: System and Setting

The underlying system for No Thank You, Evil! (NTYE) is Monte Cook Games’ Cypher system (check out this YouTube video on how to play Numenera, as I’ll be assuming familiarity for the rest of this review). 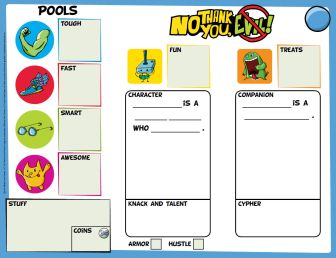 But one of the changes that really stood out to me was the scalable character creation options. Just like in Cypher, your character follows the pattern of “An Adjective Noun who Verbs.” In NTYE, there are actually three character options based on the age/skill of the child (the above picture is a character sheet for the advanced Circle option):

There are instructions provided to help decide which level is appropriate for your child as well as how to handle varying skill levels at the table.

There are a couple of other modifications to the Cypher system that despite being simplified, are still quite elegant: Recovering Pool Points by turning in Fun tokens, Having Companions that can use Cyphers, Helping other players by using Awesome tokens, and playing the No Thank You, Evil! card if things get too intense.

But I don’t want to re-write the rulebook, so you’ll either have to take my word on how great it is, or you can go buy it at your local gaming store.

The setting for this game is a land called Storia, the Land Next Door. You access Storia through a number of magical portals in your bedroom, taking you to different areas, (Under the Bed, Out the Window, Behind the Bookshelf, or Into the Closet). Each area is themed with what you’d kind of expect to find through that portal (scary things Under the Bed, outdoorsy exploration things Out the Window, literary things Behind the Bookshelf, and fantasy things Into the Closet).

The setting is full of the imaginative things that cater to the whims of children. Anything is possible, from hornless unicorns and future-telling frogs to IFOs (Identified Flying Objects) and Bowling Pin Princesses. If you or your players can imagine it, you can weave it into the story.

My first time playing it with my son is a good example of how Storia can be used. I had him point to a location on the map and made up a scenario that seemed thematically appropriate. He pointed to the One-Eyed Mountain, so he journeyed there and had a conversation with the mountain, who was crying great big tears of lava. It turned out that the thunderstorms overhead were striking the mountain’s head with lightning and it hurt! The lightning didn’t used to do that, but it started after a herd of stick-horses (which I as the Guide spotted as being next to the mountain on the map) had visited. He promised to talk to the stick-horses about what happened, then went to the ranch. They had found a large, silver pole when they climbed to the summit and took it back with them, hanging it proudly over the barn doors, not realizing the damage they had caused. But they weren’t just going to give over their prize; a challenge to a race for the possession of the lightning rod ensued and a few successful dice-checks later, he returned to One-Eyed Mountain and put the rod back in place. The mountain was incredibly grateful and gave him one of its prized woolly white sheep in appreciation.

That content and story wasn’t found in the Rulebook or Adventure Book, but if you’re needing an idea for an adventure, the Rulebook is quite full of adventure hooks, and the Adventure Book has three complete story arcs awaiting exploration. But you are welcome to introduce whatever elements or themes you’d like into the game. This is your Storia!

In conclusion, I am very pleased with how this product turned out. I’m excited about being able to use it as an entry point into RPGs for my kids, and I think it’s a good entry point for beginner GMs too (I include myself in that group).