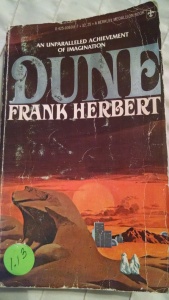 This book is older than I am, and yet I have only now gotten around to reading it. I’ll only give a brief overview of what the book is about as it’s one of those classics that anyone who would read it probably already has. But for those few who have yet to read it, general spoilers are ahead!

A Duke and his family are sent to a desert planet as a form of punishment, but there are plots within plots within plots on both sides of the planetary transfer. The Duke is subsequently slain and his wife and son are thought dead as they are overtaken by a fierce desert storm. But they aren’t dead; they’ve instead taken positions of leadership amongst the Fremen, locals of the planet.

The Duke’s son, in addition to the careful and extensive training he received, is also the result of thousands of years of careful, secret breeding. Those two factors joined with exposure to the geriatric desert spice, gives him the ability of experiencing both the distant past and the distant future. In other words, he’s aware of almost everything that has happened or might happen. He was able to use his various abilities to lead the Fremen to battle to gain control over the planet and be able to confront the Emperor and reclaim his ducal rights.

There’s a LOT more to the story than that (like 500+ pages worth), but that’s how I’d summarize the overarching gist.

My reactions to it are a bit diverse. For one, I was reading a physical paperback. It has been a really long time since I’ve done that (which is surprising as I remember thinking ill of ebooks). And because of that, it took me longer than I had expected to read it. It was more difficult to read a page or two throughout my day, and I found myself being more intentional about carving time aside to sit down to read. It also drove my wife bonkers when I had the bed lamp on late into the night, whereas the soft glow from my phone doesn’t bother her as much.

Another reason it was an interesting experience for me was that I had recently heard the book being talked about from a writer’s viewpoint as how to handle plot twists well. So my reading of the book kept brushing against the fourth wall as I saw what the podcasters had been referring to.

And one last reason I’ll mention was that, to be honest, I have held off reading it for years because it intimidated me. I’m not entirely sure why, but it had been placed on a pedestal in my mind, and part of me feared what would happen to that pedestal once I actually read it. I can now say that there was good reason for it being lifted up like that, but it shouldn’t been as high as I had allowed it to be.

I’ve gone ahead and put the next two books on hold at my library (ebook versions this time), and am looking forward to reading the initial trilogy. I am still up in the air about the other 25 or so books in the series, but I’ve heard the next two are also quite good. I think I may also scrounge up the video and see how the adaptation was handled.