Well, The Kane Chronicles have come to an end. And while I’ve been really been enjoying the series and think it has gotten better with each book, there’s a part of me that’s happy to be done with it. It seems to me that Rick had a good thing going with the Greek gods in his Percy Jackson series and wanted to branch out into the other mythological pantheons, and this series was his taking care of the Egyptians. He did a great job wrapping up all the loose ends of the series and almost put a ‘happily ever after’ bow on top of it. There were a few allusions made to the other existence of the other pantheons and stories taking place, but this was mostly written in a silo. (That being said, I am aware of there being at least one crossover book between the Kanes and Percy Jackson). But enough about the series, onto the book!

The Serpent’s Shadow picks up a few months after where The Throne of Fire left off. Some handwaving is done at the beginning to indicate the character growth and development. It’s done well enough to set the stage for the book, but I’m again wanting to have seen it for myself instead of just hearing about it. Chaos has escaped its bounds and is (apparently) wreaking havoc upon the world. It will stop at nothing in its desire to completely destroy everything, and it’s up to Carter and Sadie to stop it. But what can two young adults do against one of the great cosmic forces of existence? Their attempts at waking Ra to deal with it didn’t go so well, and they’re wise enough to know a frontal assault would be suicide.

They cleverly figure out a way that might work, but it’s one shot in a million. But they make the shot and Carter takes the throne as the new Pharaoh. The ending is quite satisfying and I felt very content closing the book after the last page.

One thing I found in these books is that it is surprisingly easy to forget that Carter and Sadie are young teens. A sentence toward the end of this book sums it up nicely:

It felt strange being called children. I didn’t feel like a child anymore. Children weren’t asked to fight Chaos serpents. They didn’t lead armies to stop the end of the world.

Had a different set of ages been slapped on them making them late teens instead of early, I don’t think a lot would have changed in the books. Sure some of the side-characters’ antics might have been toned down a little, but I don’t think there would have been much different about any of the main characters. I don’t know how I feel about that – it could be a sign of a good author (keeping things general enough to cater to a larger audience), or it could be an indication that Rick didn’t know kids would have really handled the pressures and experiences that Carter and Sadie had.

My rating for this book matches the others, so it’s a good indicator of how I’d rate the entire series: 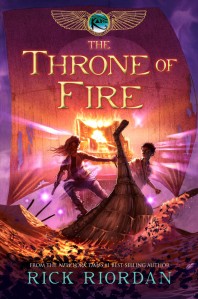 The Throne of Fire is the second book in the Kane Chronicles. The issues I had with the first book, The Red Pyramid, was that it was too shallow, that there wasn’t enough character development, and that it was too full of tropes. So as I cracked open the sequel, I was expecting much of the same.

While The Throne of Fire is still a bit shallow and tropish, I felt it was much better balanced. Even though new characters were introduced, there was better character development all around, and it ended with all the main characters being pretty well flushed out (all things considering). I found one of the new characters especially enjoyable: Bes, the ugly dwarf god. And tropes are present, but I think Rick emptied his quiver in the first book, and this one benefited greatly from it.

In general, I thought this was a big improvement on the first book and set a new standard in my mind for the trilogy. The pacing is still pretty fast, so hold on tight as you join Carter and Sadie in their quest to awaken Ra. Apophis is about to escape his prison, and Ra might be their only hope to save the world. Unfortunately, waking a sleeping god is not as easy as it sounds. 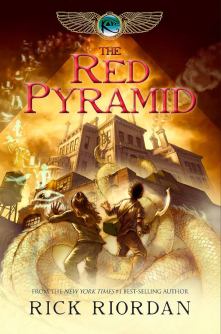 I read the Percy Jackson series a couple of months ago and knew I’d be reading the rest of the books Rick Riodan had put out. Not that they’re great books, but they’re fun to read.

And just like the Percy Jackson series, The Kane Chronicles is an action-packed adventure involving mythological gods (Egyptian this time). Any Egytion trope you can think of will garner a mention, and Rick does a good job of sustaining a crescendo of action throughout the 400+ pages. Unfortunately, because there’s little downtime for the characters, any character development has to be done in the midst of crisis, and so I was left with barely knowing who the small cast of characters really were. Which is incredibly unfortunate as the characters (spoiler alert) were dealing with Egyptian gods dwelling within them. It would have been awesome to explore the inhabitation/possession that had taken place, but it was only used as a prop and explanation for how they were able to stop the baddie.

The ending was a bit lackluster and left me unsatisfied. All in all, reading the book was kind of like eating a happy meal. Tasty and fun, but it doesn’t quite fill you up. That being said, I am planning on reading the rest of the series. 😀

In the end, here’s how I’d rate the book.