As the third book in the Gentlemen Bastard series, it has already been well established that Locke Lamora excels at being a conman. But what would happen if he was pitted against someone equally as good as him? That’s what The Republic of Thieves seeks to answer. Not only do we get to witness an incredible test of Locke and Jean’s skills in yet another area they have little to no experience (rigging an election), but they are forced to deal with a ghost of their past, Locke’s mysterious heartthrob.

We finally get to meet Sabetha and get to answer a number of the questions that have been hanging over the series. Who is this mysterious Sabetha? What is her and Locke’s history? What happened to them? What happened to her? In addition to being able to explore their joint history (along with a welcome revisiting of Calo, Galdo, and Father Chains), we get to watch them be reunited and pitted against each other by the frustratingly powerful bondsmagi. There are also a number of other little plot points woven throughout the story (including a possible glimpse into where Locke actually came from) adding to the overall tale of The Gentleman (and woman) Bastards.

While I appreciated Locke being thrust (yet again) into a situation that was beyond the scope of his skills, I felt that the con the story was wrapped around was just a side-story to everything else that was taking place. Part of why I’ve enjoyed the series so far is seeing how Locke is able to subtly pull the right strings like a master puppeteer making a marionette dance. This time though, it felt that Locke was dancing more than he was mastering. Granted, he pulled some amazing things off while having his own strings pulled, but I was honestly more impressed with Sabetha’s performance than his.

All that said, I’m looking forward to the next book in the series when it comes out. 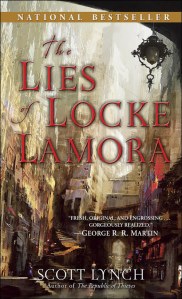